Bus Éireann’s Red Setter and local schoolchildren were in playful mode this morning for the launch of the new ‘Buster and the Belt-Ups’ school transport safety campaign. 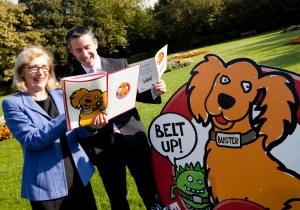 Minister for Education and Skills Jan O’Sullivan, and Minister for Skills, Research and Innovation, Damien English were also in Merrion Square to officially launch the important new safety initiative.

While all Bus Éireann school buses are fitted with seatbelts, it is vital we continue to reinforce the importance of ‘belting up’ to school pupils. There are over 44 million journeys made by 112,500 school pupils under the School Transport Scheme annually, so safety remains the absolute priority for the company.

‘Buster and the Belt-Ups’ are animated characters who represent this new educational campaign, which involves a safety video https://www.youtube.com/watch?v=QjyVeHm7IvY that will be distributed to national schools as part of packs including posters, seat belt safety certificates, activity sheets and stickers. These will be distributed in Irish to Gael Scoileanna.

The new campaign – which aims to engage primary school students to continually wear their seatbelts, by relating to the various Belt-Up characters and their key message – is endorsed by the Road Safety Authority and the INTO (Irish National Teachers Organisation).

Minister English said: “This campaign is not just about school children. It is vital that parents, guardians and teachers get on board to highlight the importance of road safety. They play a major role in conveying the message that it’s ‘the norm’ to reach for your seat belt once you get on the bus.”

Minister O’Sullivan said: “I am delighted to be involved in launching the campaign. The safety of our school children is obviously extremely important and I believe this initiative is a great way to get the message of ‘belting-up’ across to students. Education is the most important means of achieving compliance with the requirement to wear a seat belt and the use of ‘Buster and the Belt-Ups’ makes it very easy for younger students to relate to.”