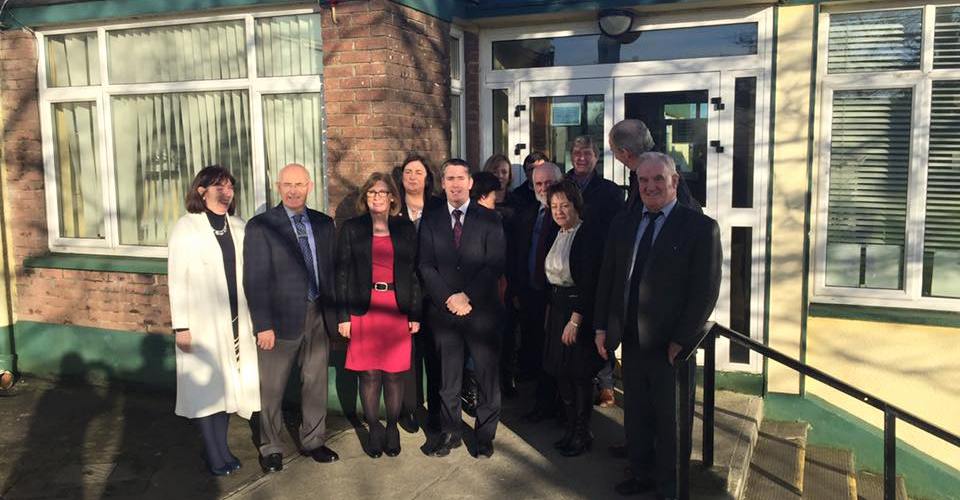 This Thursday, my colleague in the Department of Education, Minister Jan O’Sullivan T.D. visited St. Fintina’s Post Primary School in Longwood. We toured the building which first opened in 1953, and sampled aspects of the formal and non formal life of the school, meeting students, Student Council, parents, staff and BOM members, all of whom are looking forward to the new purpose built building opening later this year which we also toured under construction. Former Labour Cllr. Tracey McElhinney and local Fine Gael Cllr. Joe Fox also attended. You can see some pictures on my Facebook page below:

Today, Monday 25th May 2015, I turned the sod on the new purpose built second level school for Longwood with accommodation for 500 students as well as a Special Needs Unit.

I told the gathering from the community of the wider Longwood area that today is a proud day for the Longwood community as the sod is turned on a new purpose built school, with contractors, Ganson, due on site in the next two week to commence works.

Schools are at the heart of every parish and community in Ireland. They are the engines of communities, and now Longwood will have a brand new engine to propel it into the 21st Century.

I am delighted that after all this time that the sod has finally been turned for the new Second Level School in Longwood that will serve the town and the surrounding hinterlands.

I want to thank all those involved in bringing this project into fruition; the current and past boards of management at St. Fintina’s, the parents groups, the staff & pupils at the school.  For years they have put up with working in a school that was in need of replacement. The standard of education provided remained high & this ensured that the necessary enrolment numbers were sufficient to back up their argument for the new facilities.”

I want to acknowledge the input of Principal Tom Stack. I remember meeting with a delegation of parents and staff led by Tom in 2002 on this very issue. It was through Tom’s persistence and the willingness to continue with the campaign for a new school that we are where we are today.

Today marks the end of a long campaign to secure a new second level school for Longwood. The campaign has gained the support from across the community and all political representatives from the area over the years.

Peter Kierans, Chief Executive of the Louth Meath Education and Training Board was also commended for promoting the need for the new school in Longwood over the past decade

Parish Priest Fr. Carney did a blessing in the presence of the guests as well as students, parents and community representatives.