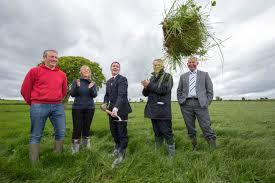 Local Minister for Skills, Research and Innovation and Meath West Fine Gael T.D. Damien English has welcomed the launch this week of the second tranche of GLAS, the new agri-environmental scheme which replaces REPS and AEOS.

The first tranche of GLAS, which closed on 26 May this year, proved a huge success, attracting almost 27,000 applications. The second tranche will increase this to at least 35,000 and up to 40,000. The overall target for GLAS is to attract 50,000 farmers into the new scheme over its lifetime and Minister English commented that it was clear that GLAS was well on its way to meeting that target.

For the second tranche of GLAS, a number of adjustments to the available actions are being made, and farmers and their advisors are urged to familiarise themselves with them.

Minister English commented: “The Minister for Agriculture Simon Coveney T.D. has announced that he is publishing the Terms and Conditions for the second Tranche of GLAS immediately, along with the detailed Specification for Tranche 2 actions.  Farmers and their advisors in Meath West should read these carefully.  The live system for applications will then be opened will remain open for some six weeks. I urge Meath and Westmeath farmers to apply. As I have often said before the export value of Agricultural products is worth €493.8m to Meath and €216m to Westmeath. Agriculture is a huge industry locally & it supports thousands of direct & indirect jobs locally. GLAS and other iniatives from this Government help and support this important work by local farmers.”